So we started our morning off with Evan going to the doctor for his 5 year visit which should not be too bad but he never had his 4yr immunisations last year due to having the rotovirus...Taking Evan to the doctor has always been horrible! So needless to say I have been really nervous about this visit! Yes, I did bribe him with being able to get a toy if he was really good but usually he doesn't care and is under the table hiding and not letting them near him from the get go so as you can see in the picture below it was night and day difference...Thanks be to God! He had a few moments but nothing like it usually is and in his defense we were there for over an hour and a half!!!  Yeah :) I am so proud of you buddy and I am so glad it is over :)
Woo hoo!!! 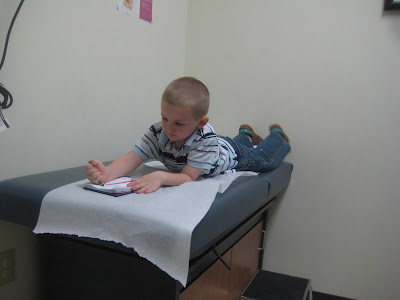 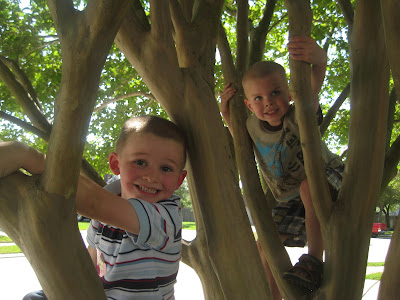 Evan has been so super excited that Blake was coming to town :) Evan and Blake have been friends since they were 18 months old and ever since Blake moved away last year the boys have been missing each other! They have only seen each other 1 maybe 2 times in the past year and it is amazing how they just pick up where they left off...I know you are probably thinking ummmm hello they are kids but I swear these two just have some kind of special connection :) And I love it! Evan told my mom today that his very best friend ever- Blake was coming :) They are just so cute together and we miss them dearly :( Super excited and feeling very lucky and blessed to have them come in for Evan's 5th birthday party!!! We love you guys :) :) :)
Posted by Cory at 11:02 PM