So last Thursday we did a trial Kung Fu class.  It is at this place Bryan picked out that does a mixture of all forms of traditional Koren martial arts. The trial class was just between him and an instructor and Evan really seemed to like it :) So we signed him up for the program which is 2 nights a week. I am on the fence...I do not like that it is at night- as a stay at home mom I like for things to be during the day and family and bedtime to be at night but they only offer night classes and I am concerned that it may promote violence outside of there facility...I do however love the respect and discipline of it :) We will see as for now he is excited about it :) 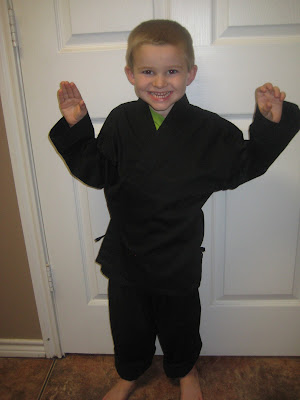 Today was his first real class...And oh my...he is the youngest by far and they have all different color belt colors in the room but he did pretty well even with the whole new language as they have terms for everything and count in Koren... When he was doing the private part I caught him yawning a few times but I think it was because he was really tired...He did try really hard :) I didn't take any pictures of him during practice because I am not sure if I am suppose to...& I didn't want to have to drop and give them some push up's-you know being pregnant and all...:) I'll have to ask next time :) He was so super excited that at the end of class he was brought to the front and given his white belt :) I must say it was a cute little ceremony- I may have even shed a little tear but I won't tell :) 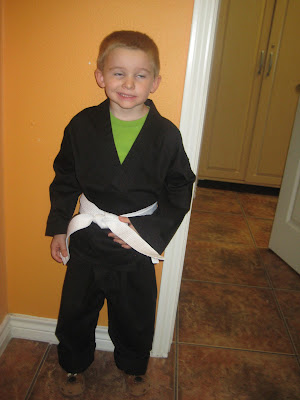 This is the worst picture ever! But the only one I have with his white belt as the instructor came to talk to me and then he wanted no part of pictures so I will have to take a better one on Thursday...If I can remember how to tie the thing- they gave me a little tutorial but we will see :) :) :)
Posted by Cory at 9:52 PM