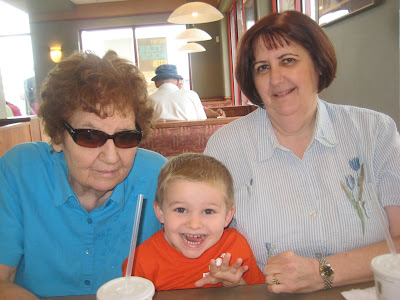 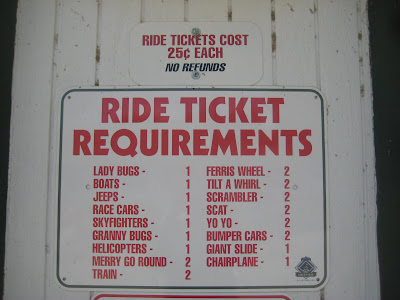 Bay Beach is an amusement park (exc) that was built in 1921 and the rides are only 25cents...Of course they will all tell you when they brought my sister and I it was only 10 cents a ride but none the less it was a good time! My Grandma wanted to take Evan last summer but we didn't make it so she really wanted him to go this year :) 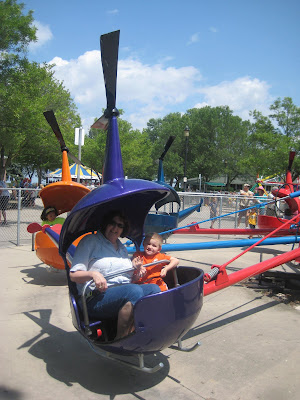 Mom and Evan in the helicopter ride :) 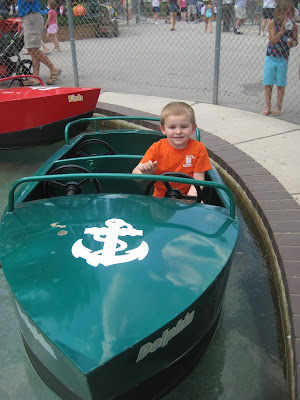 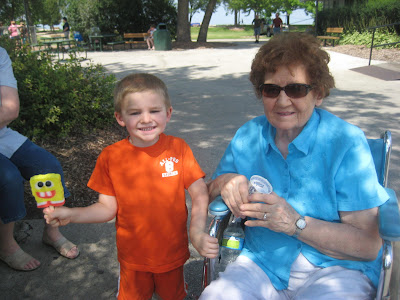 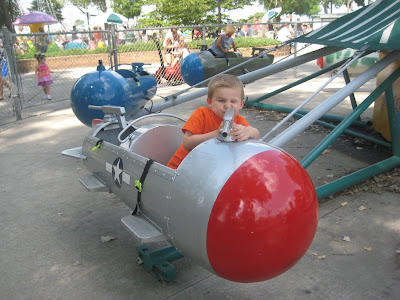 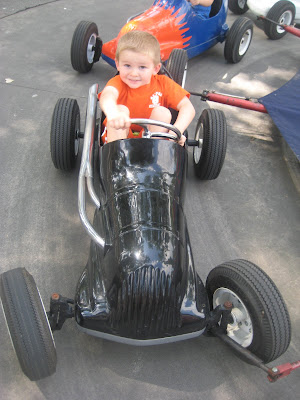 At first he was mad because he wasn't tall enough for the big rides...He said these rides are for baby's! But then he got over it :) My little dare devil... 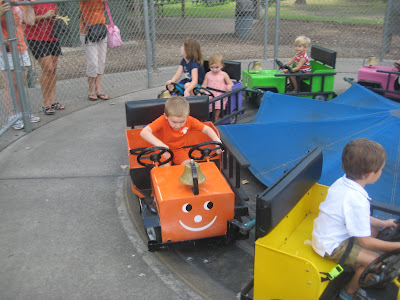 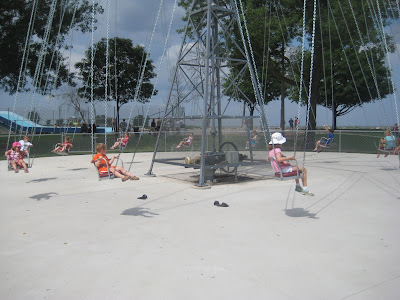 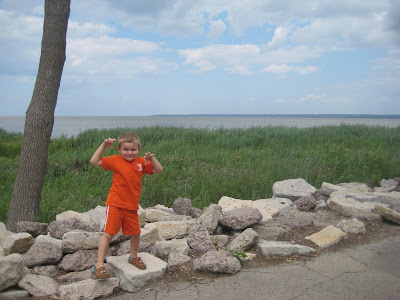 My little monster :) With Bay Beach behind him :) 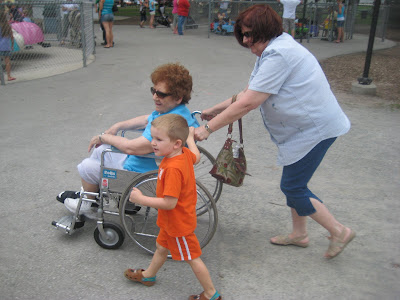 First he was telling Buzzy where we were headed and then... 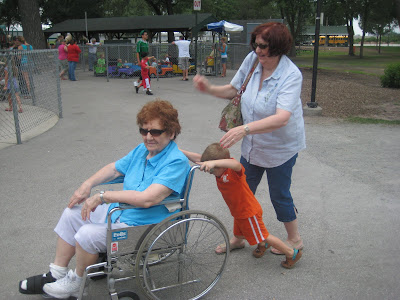 He wanted to push her there :) 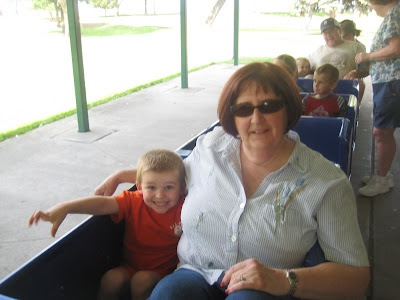 Evan sat with his Granny on the train ride :) 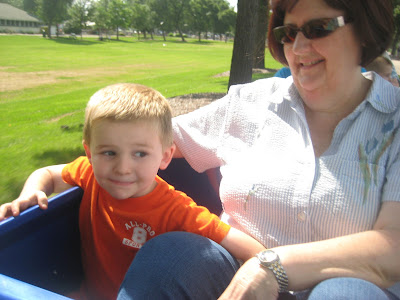 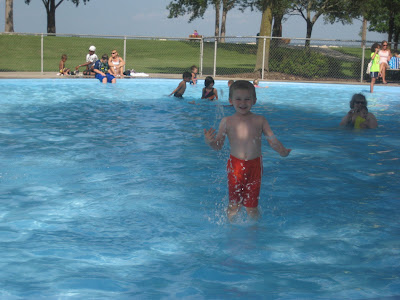 All day he asked me to go in this pool area! I didn't bring his swim suit but I did bring extra cloths so I finally broke down and let him :) 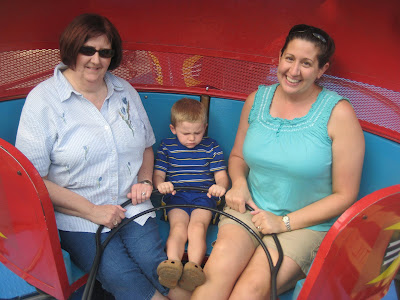 Mom, Mr. I don't want my picture taken, and myself on the tilt- a- whirl :) I asked if he went with an adult if he could go on the ride and they said yes!!! 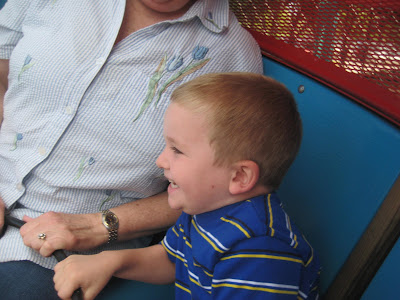 By far a tie for his favorite ride :) His other favorite is below :) 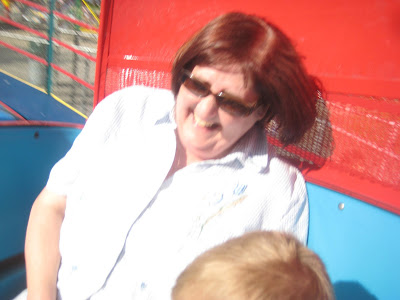 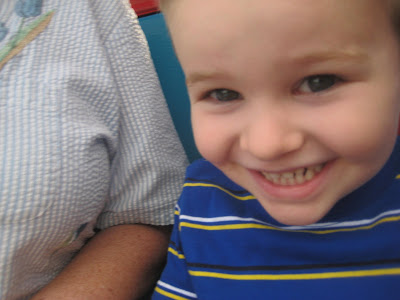 I love the tilt-a- whirl but not as much as I loved seeing this little face enjoy it for the first time!!! 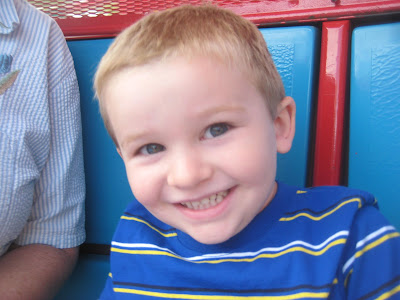 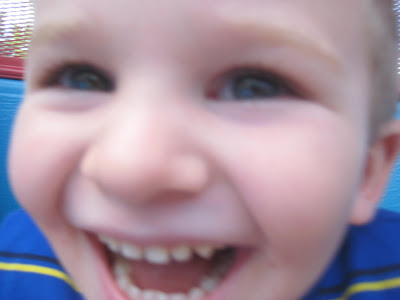 It was pretty tricky taking pictures as the ride was whipping us around but it was so worth it :) 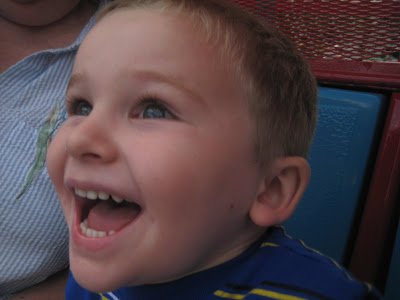 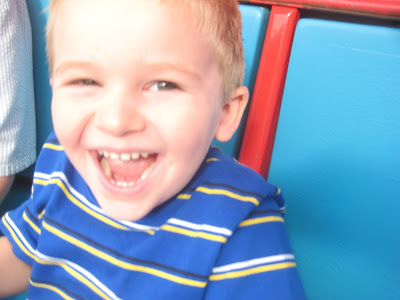 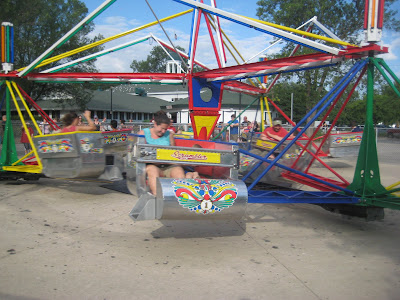 AND then there was his tie for his favorite ride!!! The one I really did NOT want to ride on and I REALLY- REALLY- REALLY-wish his daddy was here to go on it with him! But Daddy was not here and Granny would not do it so that left me :( It was 5 mins of pure yucky-ness - how do I know it was 5 mins because I timed it... You can see me looking down in this picture :) However all you can see of Evan is his little legs and a tiny bit of his head...Let me tell you though even though you can not see him you sure could hear him!!! Is was super duper excited and hooted and hollered the whole ride :) See Evan Mommy really does love you!!! :) 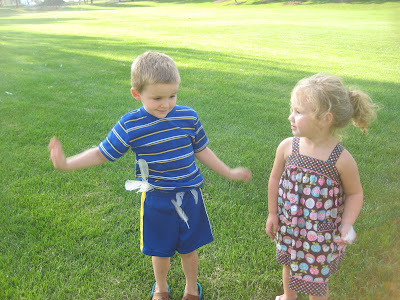 The last ride did me in and we grabbed some food and let Evan run around a bit before we went to see my Grandma :) He meet a little friend Mikaela who was in WI visiting her grandma as well...they chased the sea gulls and then collected their feathers and flapped their wings and pretended to be sea gulls :) 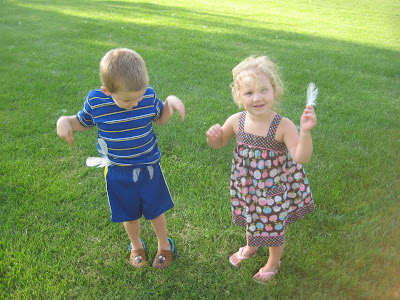 We didn't get to my Grandma's until 7:30...we didn't mean for it to get so late it just kinda ended up that way...She was just tucked into bed but hadn't fallen asleep yet so we stayed and chatted for a bit :) I regret that I do not have a picture of her and Evan but I just didn't think it was right to ask her for a picture when she had her night cloths on...It was good to see her and I do wish we had more time to spend together...Love you Grandma :) When we left my Grandma's we stopped by my Aunt Kathy's. She also lives right around there...Evan's mouth dropped when he saw their garden :) Uncle Jim was so kind to show him around :) 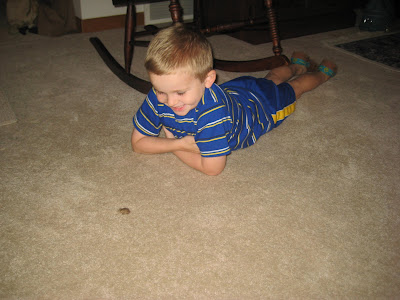 Aunt Kathy and Uncle Jim are so very kind!!! Uncle Jim even found a tiny toad and they let him bring it in their house and put it on there white carpet :) After they released him Aunt Kathy was soooo kind to offer Evan some grapes and my adoring little child said no thank you...do you have any cucumber!!! I swear...She thought it was funny and with a garden like that she sure did have a cumber :) I don't get to see my family enough but when I do I tell you they sure make you feel loved!!! Love them :) We left at like 9pm to head back to my parents and my little one was very quickly out like a light :)
Posted by Cory at 4:53 PM