I read so many blogs...more than I should admit to :) It's no wonder how many of them make the money they do. With their elegant writing and amazing photography. For me...I do it for myself, for my family and to one day share this scrap book with my little man or maybe his wife :) he he...For I am not a skilled writer I choose smiley faces over punctuation and my pictures are left unedited as I wouldn't know how to alter or edit them if I tried. But I think it is the unplanned, spontaneous moments of living that make the best memories! I have enjoyed documenting the past 6 months of our life and look forward to the future! :) Thanks for stopping by :)
As for today: a haircut was in order!!! I could go no longer...I tried I really did but the long hair was driving me a little ok a lot crazy :) I was going to keep it a little longer as I use to do a 1 & 2 buzz and today we did a 2 & 4...It will grow...his hair grows like little weeds :) he he And really he hasn't said it was short...he just wanted to know what the crunchy stuff in his hair was :) As she spiked it with moose or gel or something and it made his hair feel hard :) he he 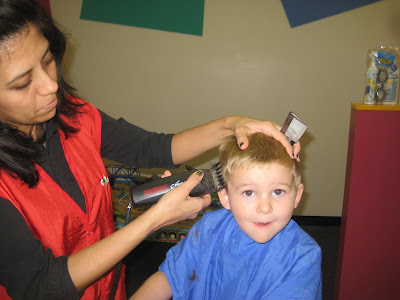 Evan sooo hates to have his haircut so in efforts to keep him still I actually busted out some bubble gum!!! I said I wasn't going to do it yet as he has never had it but it worked... he stayed really still and he liked it but not enough that he asked for it again so that is good :) 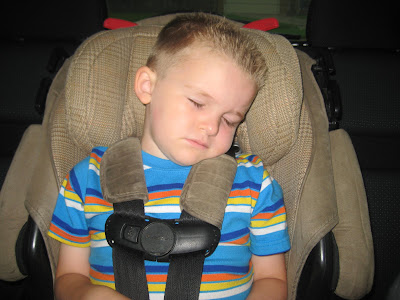 With his crunchy spike and all he took a nap which he never does!!! But he got up super duper early this morning and we were running around most the day so I let him sleep for a bit :)
Posted by Cory at 9:57 PM