So I took an unintentional hiatus from documenting our lives this week. I have to say though that I have started going back to the gym...and I haven't had time to write...See with working out again I have been so tired that I have been falling asleep with Evan and usually after I get him to sleep is when I would blog :) So I have some catching up to do but please know that I do miss the space when I haven't been in a while :)
So I will start with last Tuesday: 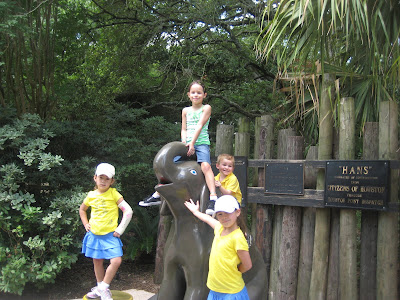 My girlfriend called and invited Evan and I to go to the zoo with her and her sister and her kiddos :) My friend...Pilar and I use to see each other almost everyday as we were/are work out buddy's but with her new job we haven't seen as much of each other so I was really excited about the invite :) 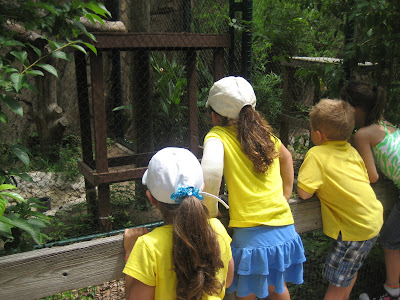 The kids looking at a leopard...It is funny because we did not plan on all the kids wearing yellow and blue it just happened that way- and it has happened more than once :) 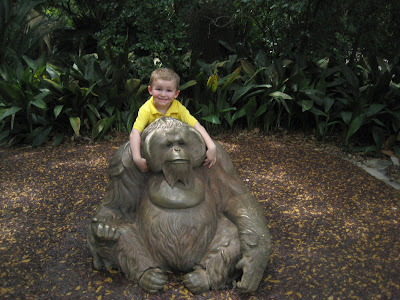 Evan hugging one of his relatives... he he he :) 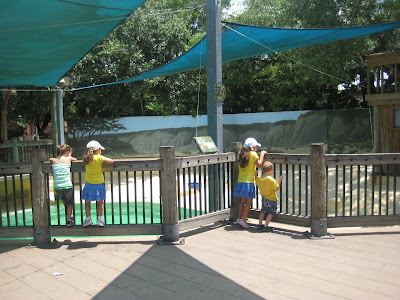 All the kiddos looking at the sea lions...the little girl that is not matching is one of their friends :) 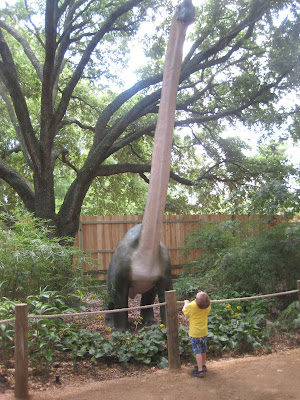 The zoo is doing a dinosaur exhibit through the summer...here is Evan looking at his TALL neck :) 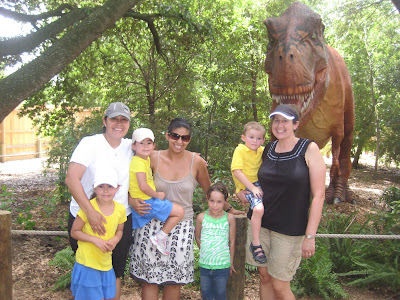 Here we all are...Mariana with Bella, Pilar holding Alex, the girls friend Ratchel & Me and Evan :) I am not sure Evan even knows the girls names :) He call's them the nieces ( Because they are my friend Pilar's nieces :) he he he) 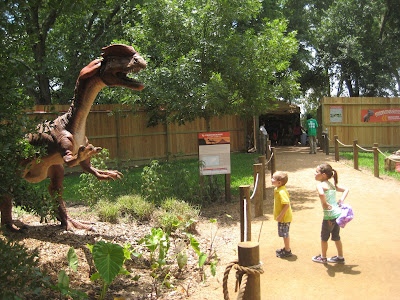 The very last dinosaur sprays water at you...Here they are waiting for it to do it again :) 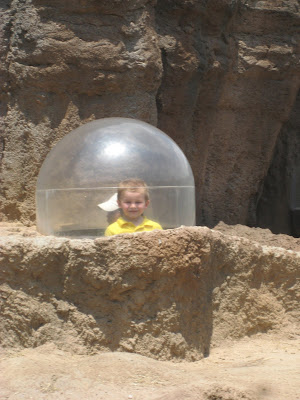 Evan in the bubble :) 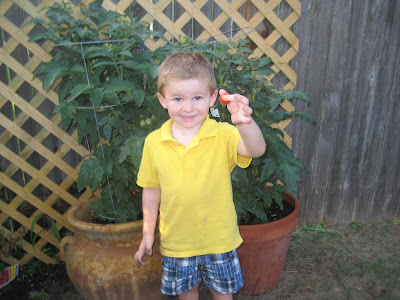 When we got home Evan enjoyed a tomato from our garden :)
Saturday: We had a busy day...We went to our friends Steve and Val's house...Val and I took the boys to a craft fair they were having at the community center :) and then we went to the library for the kick off of the summer reading program. They were suppose to have a petting zoo and a train ride but the company canceled on them the night before so they did a craft and black light puppet show instead :) 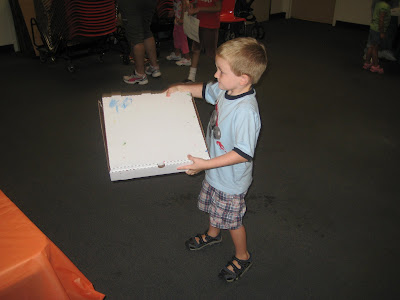 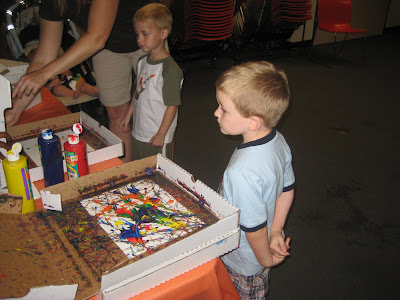 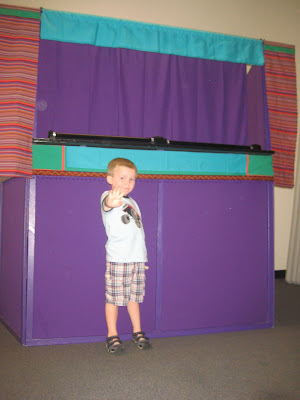 Just waiting for the black light puppet show to begin :) 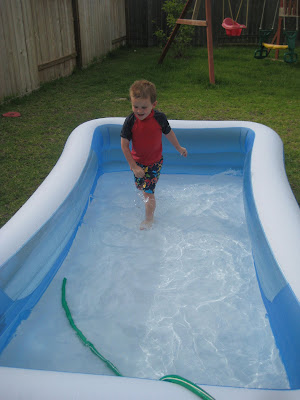 Then Steve and Val had the 3 of us over for dinner... The boys did some swimming :) 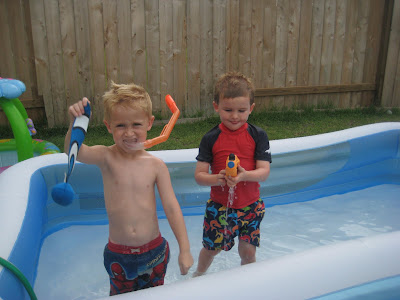 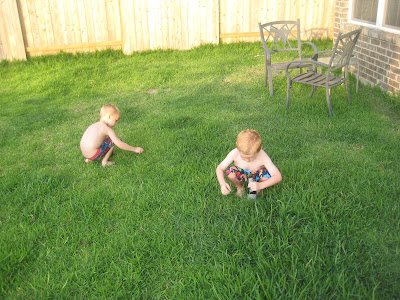 And like any 2 boys would do while together...why they picked grass and looked for spiders and bugs...It was a long a fun day with friends :)
And Today: Today was mostly a stay at home day :) Yes, even though we love to be on the go even we need to do that every once and awhile :) he he... Well, until we meet Pilar to run some hills...or mountains as Evan calls them :) 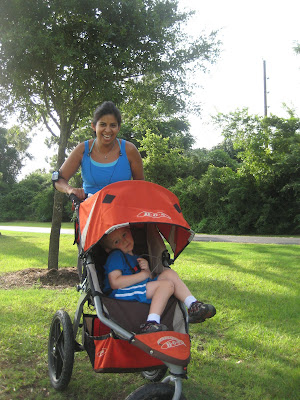 Evan loves for Ms. Pilar to push him down the hills as she can go super fast...me taking his picture...not so much :) 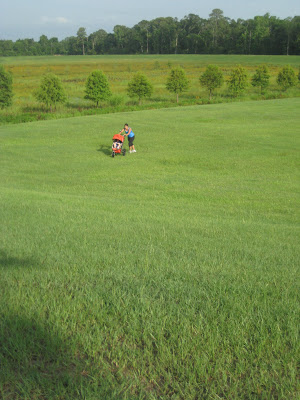 They made it to the bottom...now the fun part...making it back up with Evan and the stroller :) 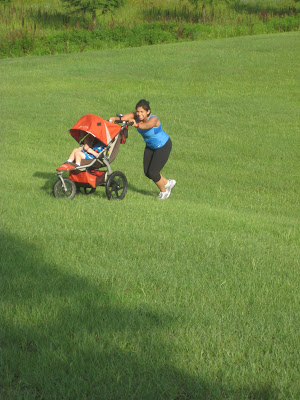 Never fear...Ms. Pilar is super strong!!! She has stroller power :) he he he 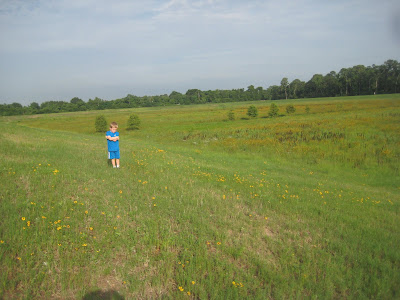 And when he is done with that...or we can do no more pushing the buggy back up the hill...we continue as he picks flowers :) 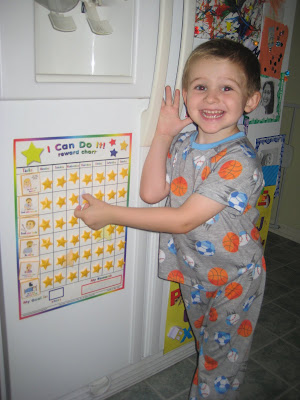 And last but not least... I wasn't sure if he was going to make it but he finally got ALL of his stars on his chore/behavior chart :) I think it is time to add a few different things to the list :) I don't know like listening :) he he...He was very excited none the less !!!
Posted by Cory at 9:52 PM