It snowed yesterday!!! I was going to tell you this yesterday but by time I got around to it, it was just so late I keep falling asleep in my chair :) This was the second time it snowed here this winter. The first time it stuck to the ground a bit :) This time it it melted as soon as it hit the ground. It was cool though :) When I picked Evan up from pre school and we were coming in the house he was mad it was raining...he said why does God think we need rain! I told him because God knows best and if he thinks we need rain then I guess we do. Then Evan said doesn't God know I don't like rain! And that statement was followed by a loud errrrrrrrrrrr sound! :) He he Well he was all kind of excited when I told him it was snowing!!! The best part for him I think was being able to play with our neighbor girls. He sooooooo loves them and we do not get to see them much. 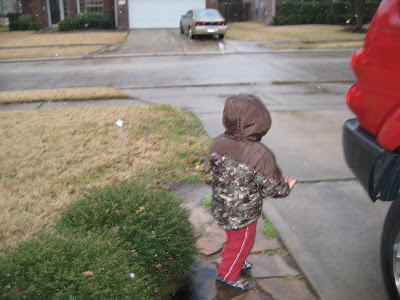 This was the first picture I took of him outside and he was looking at me...but my camera wasn't fast enough...he heard the neighbor girls call his name and he was outta here!!! :) 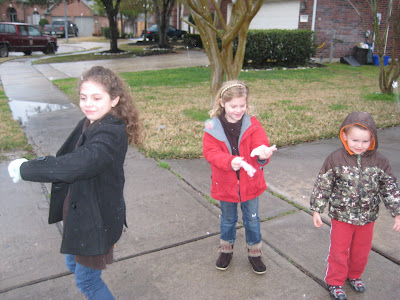 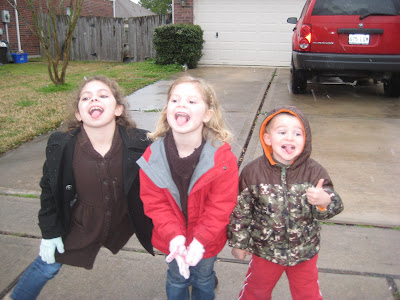 The three goof balls trying to catch some flakes with there tongues :) 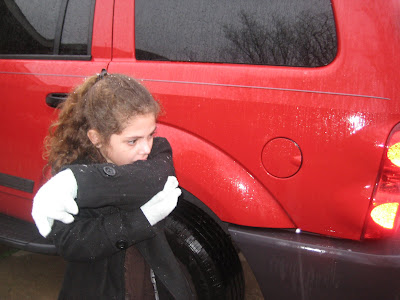 Samantha was going to show me a big flake but she decided to eat it :) he he 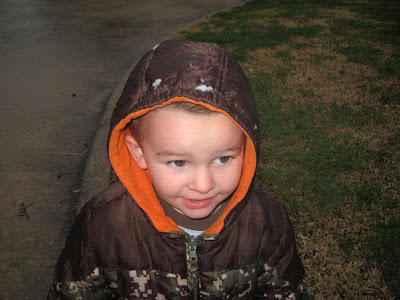 Here's my little snowflake head :) he he
It was really cool that a few other neighbors came out as well :) Good to see everyone come out to enjoy a little winter bliss. I'd say because how often does it snow in Texas but it has now snowed twice and it has been unusually cool here so who knows maybe we will get one more batch of flurries before spring is sprung :) Oh ya...and as we were walking back into the house Evan said Thank you for the snow God!!! So cute :)
Posted by Cory at 9:07 PM