A little bit of this and that :) Yesterday the 3 of us went to Academy and Evan found the fishing isle and stayed in the isle for like 30 min's...going on and on about needing to go fishing with Grandpa :) I tried to explain to him that Grandpa's lake was frozen... and it would be summer time until we could actually fish :) He didn't care he wanted every lour they had!!! He has a good behavior/chore chart that he earns stars to get prises and he decided he needed a lour to be his prize :) Yes Bryan took off all the hooks and sharp parts which mostly killed it for future use but he loves it just the same :) He even had to sleep with it :) 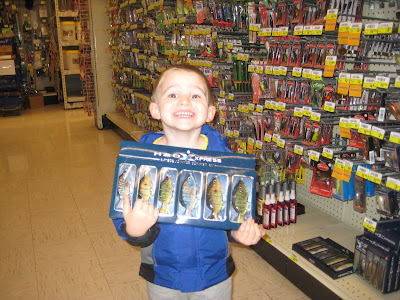 When he saw this pack he freaked out and said Grandpa needs this!!! They were really cool but not $50.00 cool...sorry Grandpa :) he he 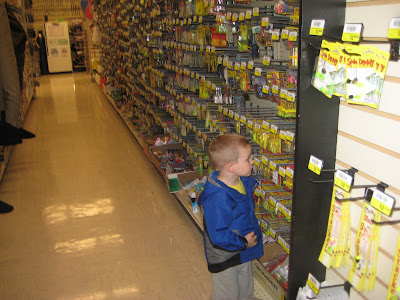 Evan putting a lot of thought into this one :) Then we were off to the mall which I really do not like to do on a Saturday but Evan enjoyed using his quarters his Great Grandma Buzz sent him for Christmas :) 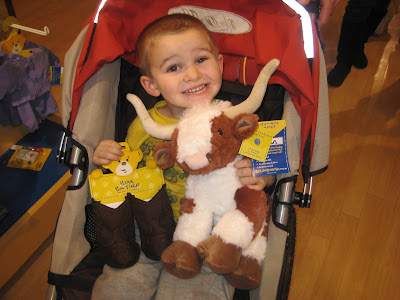 I also had a coupon for Build a Bear so it was his lucky day! I love the Longhorn...I have been waiting him to choose it and with no influence today he did :) This was the first time we let him get shoes for an animal though :) 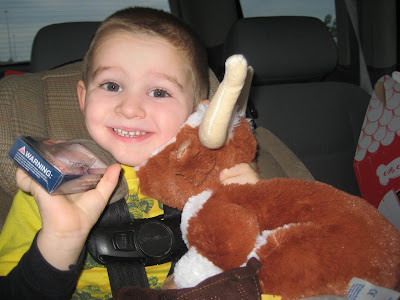 Here he is in the car with his 2 prizes...The fish lour and his new Longhorn :) 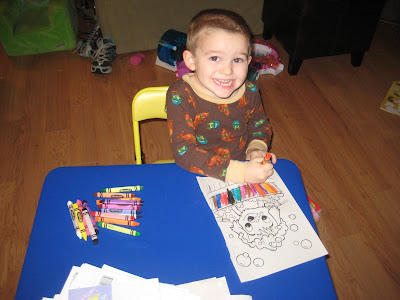 Today (Sunday) Bryan did a freezing 40 mile bike ride...yes outside :) while Evan and I spent the day in our p.j's - Enjoying some coloring and paper cutting and some snuggling :) Got to love a lazy Sunday :) Have a good week everyone!!! I can hardly believe tomorrow is Feb.1st!!!
Posted by Cory at 9:52 PM